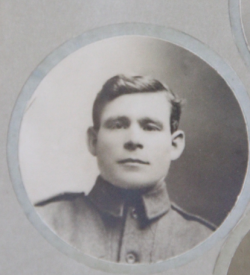 When our blood stained the sand and the water

The classic lines appear in And the Band Played Waltzing Matilda, a poignant song written by Australian singer-songwriter, Eric Bogle, in 1971. The young soldier in the ballad loses both legs to shellfire in the 1915 battle at Suvla Bay during the ill-fated allied campaign to capture the Gallipoli Peninsula.

Performers often dedicate the anti-war anthem to all young soldiers who have suffered and died in distant conflicts overseas.

George Simms, whose name and epitaph appears on a monument to the war dead in Pilley's Island, Newfoundland, was one of those young men.

Killed in action in Gallipoli, December 30, 1915, reads the inscription.

Private Simms' journey to war lasted less than a year. His untimely death on Cape Helles at the entrance to the Dardanelles in faraway Turkey was just one more fatality in the brutal struggle that became known to history as the Gallipoli campaign.

When Private Simms joined up in 1915, neither he nor anyone else in the regiment knew anything about Gallipoli. As the poet, Paul O'Neil, observed in his poem about the death of another young Newfoundlander at Suvla, he may perhaps have seen/the name Gallipoli/on some school map/of Turkey or the Dardanelles/but thought no more/than if it had been/Samarkand or Timbuktu/

And for many of us today, the name Gallipoli summons no recollection of the sacrifice and death of many young Newfoundland soldiers. One of the most misguided disasters of WW1 does not register in our collective memory. Beaumont-Hamel dominates, of course, as does Monchy-le-Preux, and Passchendaele, and the 100-day advance into Germany in 1918. 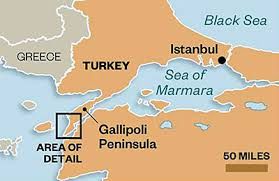 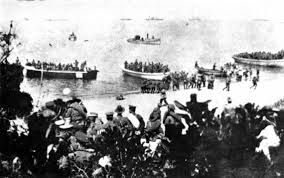 When Germany, Great Britain, and the other major powers plunged headlong into war on August 3, 1914, George Simms, a 27-year-old fisherman, lived with his parents, William and Lenora Simms, in Little Harbour just outside the once-thriving mining community of Pilley's Island, Newfoundland.

As a dominion in the British Empire, Newfoundland formally entered the conflict along with the mother country on the day that war was declared. By mid-August, the Government of Newfoundland had issued a call for volunteers to fight for king and country. George Simms decided early on that he would answer the call.

He traveled to St. John's on New year's Day 1915 and after passing the required medical examinations, joined the First Newfoundland Regiment on January 20. With just a month of initial training at Pleasantville in the city, Private Simms and his companions in 'C' Company boarded the Bowering Brothers passenger ship Stephano to Halifax and then joined the troopship Orduna for the transatlantic crossing to Liverpool in the UK.

From there they traveled to the capital city of Scotland, where they billeted in the famous Edinburgh Castle, which dated from the twelfth century. The British War Council's decision to mount a spring invasion of Turkey shortened the Newfoundlanders' stopover in the town.

A request in early January 1915 from Russia, an ally of Great Britain, triggered events leading up to the Gallipoli invasion. Russia had long held the ambition of invading Ottoman Turkey and seizing Constantinople, the birthplace of the Orthodox Christian Church. The appeal fell on the receptive ears of many in the war council, including the young Winston Churchill. It set in motion a disastrous chain of events. Like crusades of an earlier age, this campaign, too, was destined to end badly.

The regiment moved to Stobs Military Camp at Hawick in southern Scotland for basic training and then in August to Camp Aldershot in Berkshire, England, for a few weeks of intense battle-readiness exercises before embarking for active service in Gallipoli.

Private Simms, along with 1075 officers and men of the First Newfoundland Regiment, landed at Kangeroo Beach, Suvla Bay, in the early morning hours of September 20. The men barely had time to scrape shallow trenches in the rocky beachhead before the Turkish artillery spotted them at dawn. Within minutes they had suffered their first casualties. Sixteen men, caught in the open, were wounded by shrapnel when an enemy shell landed nearby--a costly lesson in the reality of war.

Over the next week, the Newfoundlanders adjusted to their surroundings and within ten days, began their rotation in the firing line. In some locations along the rocky hillsides, barely fifty yards separated their trenches from those of the Turks.

Snipers presented an ever-present danger, but in the hot October weather of Suvla, a higher risk existed in no-man's land where the corpses of Turkish and allied soldiers decomposed in the heat. The resulting plague of flies, fleas, and rats, bred diseases like dysentery, typhoid, and cholera. Lice, too, were a constant scourge.

During those difficult days, Private Simms became a comforting presence for the younger soldiers in his platoon. His maturity shone in the presence of young men barely out of childhood.

In the face of mounting casualties and insurmountable difficulties in supply and reinforcement, the British War Council decided to abandon the campaign in Gallipoli. Under cover of darkness on December 19, allied soldiers, including the Newfoundlanders, began the evacuation. They withdrew to waiting troop transports which carried them to the Greek islands of Imbros and Mudros. The successful withdrawal under the very noses of the Turkish forces was a miracle in itself.

Only the British forces furthest east at Cape Helles remained on the Gallipoli Peninsula.

The Newfoundland ranks had been cut in half by casualties and illness. Private George Simms remained one of the healthy.

Everyone looked forward to a well-earned rest. It lasted for barely two days. In one of those vagaries of war, the Greek laborers employed by the British forces at Cape Helles decided they had had enough of the intolerable conditions. Without notice, they took to their boats and sailed away.

The British commander, General Sir Charles Munro, ordered the Newfoundland battalion back to Cape Helles to replace the Greeks. In effect, the soldiers recently removed from the firing line at Suvla Bay, now took on the tasks of cooks, diggers, and pack-rats.

Constant Turkish shelling from across the Dardanelles and from the new enemy positions at Suvla created an even deadlier environment than the one they had left behind.

On the morning of Thursday, December 30, one of those shells hit the improvised kitchen area where Private George Simms was working. Shrapnel tore through his legs and abdomen. He died at 3 pm that day in the 57th. Field Hospital.

On January 9, the British forces at Cape Helles slipped silently away in the dead of night. The allied withdrawal from Gallipoli was complete. 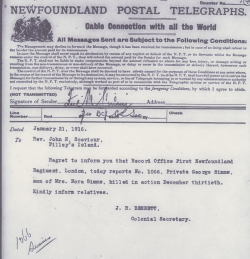 NB: Click the link for Liam Clancy's excellent version of And the Band Played Waltzing Matilda.