You are of royal descent because everyone is.

When Edward Longshanks came to the throne of England in 1272, he literally stood out among my 4 million or so relatives in the 13th century. At a time when the average height of a male was just under 5 feet, Edward stood at 6' 2''. a lisp and a lazy eye were other genetic traits he would leave to posterity.

Edward became my royal ancestor (and yours, assuming you are of English descent) by virtue of a simple mathematical calculation. Each of us was born with 2 parents, 4 grandparents, 8 great-grandparents, 16 gg-grandparents and so on into the shadows of history with the number of ancestors doubling with each generation.

In terms of your DNA, your parents gifted you with 50% of their genes, your grandparents each contributed 25%, your great-grandparents, 12.5% until you get to very distant relatives who were downright miserly. 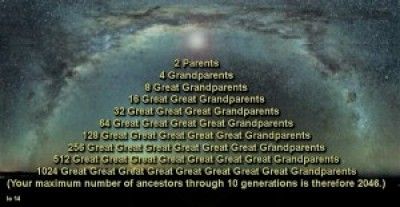 After 10 generations, I have acquired a modest 1024 direct ancestors of the ggg...grandparent variety who theoretically would have been living around the year 1650 in England--more than a full century before my gggg-grandparents, John Colbourne Sr. and Elizabeth along with their four children crossed the broad Atlantic.

Even 1024 relatives are far too many to invite over for Xmas dinner, nevertheless, a manageable number if they aren't constantly sending you friend requests on Facebook.

Things get more interesting as we journey further back in time. At generation 22, that of our 20th great-grandparents (Longshanks and Eleanor), the number of direct ancestors has grown to a frightening 4,194,304, each one of whom would have contributed a smidgeon of their DNA (0.004069%) so that I could be me and you could be you.

That's a problem. The population of England in 1272 was just 3,500,000 which of course means that everyone alive at that time was my relative and yours. Just so we don't get too carried away with the royal connection, we would have to include in our pedigree not just Longshanks but also the scullery maid in the royal kitchen and the filthy beggar outside the palace gates.

Genealogists point to a flaw in the calculation of the massive numbers. The model does not account for what really happened in the bedrooms (and fields) of 13th century England. Close encounters, of the first and second cousin kind, accounted for more than 80% of conjugal unions and procreation in those ancient days. Uncles marrying nieces and aunts hooking up with nephews were also quite common.

Duplicate ancestors tend to jump out of the family tree in droves.

The royal families of Europe deliberately practiced inbreeding in order to protect their imperial bloodlines. Kings and queens quoted the holiness laws of Leviticus 18 to justify the practice. Cousin marriages were sanctioned in the Old Testament. Isaac and Rebekah's first-born son, Esau, for example, married his first cousin, Mahalath, daughter of his father's brother.

The hairy, red-headed Esau and Mahalath produced five sons. Their children made do with three pairs of great-grandparents rather than four.

After Sodom and Gomorrah, Lot's two daughters took it up a notch (Genesis 19:30-38) by each bearing sons for their father. Lot became both the grandfather and the father of the two boys. Lot's wife, their grandmother, became a pillar of salt.

All of which created loads of additional problems.

In the middle ages, Royals got in on the act in a big way.

Charles II of Spain, the last of the great Royal House of Hapsburg, was born on November 6, 1681, to Phillip IV and Mariana of Austria who were uncle and niece, thus making Charles, their son, a great-nephew and a first cousin respectively. All of Charles' great-grandparents, gg-grandparents, and ggg-grandparents were closely related--an extreme case of keeping it all in the family.

After 5 generations, it all culminated in pedigree collapse and disaster. Charles was born with a multitude of genetic defects, early dementia, depression, a deformed jaw, an elongated skull, one pea-sized testicle, speech impediments, and spindly legs. Courtiers said that he was so ugly no one could stand to be in his presence.

Thankfully, he was not my direct ancestor. Or, was he?

The outlaw, Jessie James, married his first cousin, Zerelda Mimms, in Clay County, Missouri in 1874. Their descendants still argue bitterly about their ancestry.

He, too, met an early death.

In his book Wit and Humor of the Age, Mark Twain shared his comedic take on tangled family relationships: Well Sam, I'll tell you how it is. You see, I married a widow, and this widow had a daughter. Then my father, being a widower, married our daughter, so you see, my father is my own son-in-law.

In 1947, Dwight Latham and Moe Jaffee turned the situation into a song that was subsequently covered by the likes of Grandpa Jones and Willie Nelson. You are probably more familiar with the Ray Stevens' version of I'm My Own Grandpa. (Available on YouTube).

Using the pyramid model, you and I are most certainly related to Charlemagne, Emperor of the Romans in 872 AD--theoretically, we could have had over one billion ancestors alive at that time, each one of whom would account for 0.0001% of our DNA. In actual fact, the population of the whole of Europe was barely 50 million.

But of course, the family tree is not a tree at all, nor a pyramid. At best, it is a tangle of brambles with spikes and branches turning in on each other.

This is why I generally find that after the fifth or sixth generation, the pursuit of ancestors loses its meaning. "At some point," said the historian, Henry Weincek, "the search becomes futile--there is nothing left to find."

We should keep in mind, however, that we share 99.9% of our genetic endowment with all other humans on the planet.

In December, when you are planning that big dinner, you may as well go into the street and invite a dozen or so people at random. They are certain to be your relatives.