Someday, you'll be an ancestor too 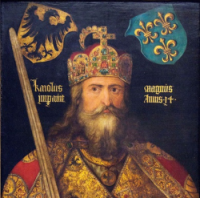 If truth be told, I have always been a Walter Mitty type, daydreaming about my exotic origins, living in heroic times, wielding the pitiless sword of righteousness.

I first became aware of this tendency from watching Lord of the Rings, the movie trilogy based on Tolkien's stories. The three films released between 2001 and 2003 drew me back to the big screen and convinced me that my ancestors were Hobbits with some Elfin genes thrown in.

What clinched the argument for me, was Cate Blanchett--Galadriel, the mightiest and fairest of the Elves who, in the closing scene, steps into a boat with Gandalf, Bilbo, and Frodo, which will take them to Valinor, The Land Beyond the Great Sea--to everlasting life. I desperately desired to be on that boat with Galadriel. Even though she was then 8,412 years old, she didn't look a day past twenty.

Alas, I had promised my wife I would be with her, throughout eternity. Goodbye, Galadriel. I yearn for you, tragically.

Around that time, archaeologists discovered that a new species, Homo floresiensis--Hobbits, had indeed existed on the remote Indonesian island of Flores some 75,000 years ago. Using my evidence-based protocol, I concluded, then and there, that these were the people who had evolved into the future me.

Then, there was that time back in the day when a casual comment from a guest at our B&B sent me off on another mad dash along the unmarked trail of my ancestral past.

"You look so much like Dustin Hoffman," said the young lady(ahem!). By coincidence, I kept a publicity snap of the famous actor from The Graduate, in my office. With photo in hand, I rushed off to the nearest mirror to find links to my true self. Sure enough, he reminded me of me, the eyes and the nose matched, as did the laugh lines around the mouth, and the fragile look of innocence mixed with devilish intent on the face. Koo-Koo-Ka-choo, Mrs. Robinson.

I had secured a link to the silver screen. A quick letter to Mr. Hoffman c/o HBO Productions in Hollywood, introducing myself as a potential relative, elicited no response. Mr. Hoffman, I understand, jealously guards his privacy.

Soon, I discovered through a cursory search at Ancestry.com that neither our parents, nor our grandparents, nor their parents had had any kind of positive interaction in the past. Factors of geography, religion, and age, had intervened to make an intimate liaison impossible.

My potential link to movie stardom was broken like a frayed string on Paul Simon's guitar. The trail ended, as is so often the case, in a dead-end street. Still, Dustin, like myself, was not excessively tall, the Hobbit gene being still dominant.

Of course, I am not alone in the pursuit of exceptional forbears. Bill Clinton, my favorite politician, and Johnny Cash, my all-time favorite singer, both claimed Cherokee ancestry as do millions of others in the US. When an ancestral search turned up no Cherokees on any appendage of Bill's (tree), he said he had misspoken. Ditto for Johnny Cash, except he had the grace to apologize to the Cherokee Tribal Council. We get a lot of pretendians, said one tribal elder.

At one time or another, as I flirted with my exotic origins in the new world, I have entertained myths that my gggggggrandparents were Huguenots, those courageous Calvinists of the sixteenth and seventeenth centuries, persecuted by the French--maybe that's where the paranoia about Churchill Falls comes from.

Then, there were three brothers (never three sisters) who were stowaways fleeing the lawful authorities in the old country. The three had engaged in riotous behavior in Ireland and had maimed a few British soldiers. When they arrived at Gander Airport (sometime in 1756), one went north, one went south, and one went God knows where.

That story didn't hold water either. I discovered that my New World ancestors had washed up on a beach and had settled down in Twillingate, Newfoundland, in 1782. They brought a few books with them but no magnificent coat-of-arms. Just a couple of wet white people. Pretty mundane.

But, I did pay a king's ransom for my family coat-of-arms during a layover from an overseas flight at Toronto International Airport in the 90s--with a mind numbed by jet lag. "You must be A distant relative of Queen Elizabeth the First, the Virgin Queen," said the guy at the kiosk as he handed me a pre-programmed printout and raked in my money. Now we were getting somewhere, I thought. Sir Walter Raleigh couldn't be far behind.

I never did find the great-great-grandmother who was an Indian princess.

My family tree became a tangle of brambles in a bog.

Until I visited the famous National Museum in Nuremberg, Germany. And in a flash of recognition, there he was, Father. Charlemagne: King of the Franks, Slayer of the Infidels, the Great Liberator, son of Pippin the Short and Bertrade of Laon, Hobbit parents from the Shire, without a doubt.

The first of the Holy Roman Emperors stood before me in all his regal glory. The intelligent eyes with a glint of merriment, the furrowed brow, the aquiline nose, the suggestive dimples in the cheeks...the beard and long locks that I sported in my hippie days...He was me.

Oh sure, it was over a thousand years ago and forty generations removed, but sometimes one has a feeling...

I have just completed a literary consultation with Adam David Rutherford, the famous British geneticist, and author of A Brief History of Everyone Who Ever Lived. He has confirmed that I am the direct descendant of Drogo of Metz, son of Charlemagne.

But just yesterday, my wife observed that I sometimes project a magnificent Mongolian aura.