The past is never dead. It's not even past 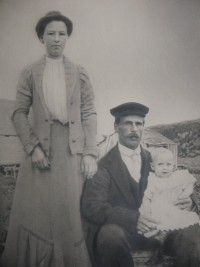 The photograph, remarkable for its detail and clarity, was taken at L'Anse au Pigeon (Lancy Pigeon) on the French Shore of northern Newfoundland in the summer of 1910. Many families from the islands in Notre Dame Bay gathered there in the early summer for the seasonal fishery, filling schooners with dried salted cod for the markets of Europe.

On the surface, it appears to be just an ordinary image of the time--shot by an itinerant photographer with a box camera and a steamer trunk filled with period costumes. He traveled every summer from the city to fishing stations along the coast. For a small fee, he dressed his subjects to make them visually presentable, snapped their picture, and months down the road they received their portrait.

Their youth was now enshrined in black and white; she, a 21-year-old; he, 27. They pose with their first child, Rupert Clifford, a Christmas baby in 1909, fragile-looking, the first-born of a large family to come.

In the background, we see the large wooden shed for fish storage and the smaller wood-frame, canvas-covered shack that is their home for the summer.

After the photo session, they dress again in their everyday clothing; she, her simple frock and apron; he, his rough fisherman's Guernsey and stained canvas coveralls. The child's dress and leather lace-up boots, the lady's fine high-necked blouse, and the man's shirt, tie, Edwardian cap, and jacket are all returned to the photographer.

They resume their daily routine. She is responsible for the household, caring for the child, and the curing of cod on the drying flakes. He spends sixteen hours a day hauling the nets, cleaning the fish, and storing it in salt.

They work in a cashless economy. His production becomes a credit on the merchant's ledger, which will be drawn down for winter provisions and the outfitting for next season's fishery. Slavery by today's standards.

Unlocking the past from old photographs and documents has long been a passion, some would say an obsession.

For over two decades, I have pored over rare documents in dusty archives. I have traipsed through dozens of cemeteries, some well-kept, others abandoned and overgrown with willows and weeds that quickly take hold when communities fade, and people forget.

Contacts far and wide have helped me find pieces that fit the puzzle.

At times the search is frustrating, always laborious, and time-consuming, but always rewarding. Sometimes, like a wide crevasse on a glacier, the road to the past seems unbridgeable. Invariably, one finds the way.

My passion for genealogy was nurtured years ago by a professor who invited me to enroll in her family history course at the university when I was searching for a beginning. My passion grew as I discovered the archival wealth of The Rooms in St. John's, church records, colonial office papers, old newspapers, war records, and census materials dating back to Sir John Berry's survey of 1675 when he was a British Naval officer on station in Newfoundland waters.

I came to understand the stories told by individual headstones, abandoned cemeteries, deserted homes, and elders whose recollections spanned several generations beyond the misty times before my own memories.

The 1910 portrait taken at L'Anse au Pigeon became a beacon, a jumping-off point both to the past and future. The man in the photo is my paternal grandfather, Wilson, born 136 years ago on May 23, 1886. I never knew him. He died on the morning of April 24, 1948, when I was just three years old. After rowing across the harbor in his punt, he climbed onto his wharf and suffered a massive heart attack.

Several days later, on a snowy spring afternoon, my mother and I watched the funeral procession from the parlour window. A horse-drawn cart with the casket, followed by a group of mourners dressed in black, moved slowly along the harbour road and up to the old United Church on the hill.

The woman in the photograph, my grandmother Priscella, was born on March 16, 1889. She died on January 4, 1973, a quiet, gentle lady who doted on her grandchildren.

Rupert Clifford, the baby, died in infancy on February 24, 1911, from one of many childhood diseases for which there was no cure at the time.